Review of book "The Adventures of Captain Underpants" by Aashima Nair


Review : I recently read a book called The Adventures of Captain Underpants.The reader of this review may think this the weirdest book on the planet, but you are wrong. The story is about two friends called Harold and George. Harold loves to draw and George loves to write stories. Well with this combination they make comics such as Dog Man,Timmy the Talking Toilet and The Amazing Cow Lady. But the best one was the Adventures of Captain Underpants. They both started selling their comics at Jerome Horwitz Elementary School ,their school. This year something bad happened. The principal Mr.Krupp, used to hate when they would pull pranks on people. But when they pulled a prank on the football team Mr. Krupp got hold of them on video. Instead of telling their parents like a good principal he threatened them to work for him till the end.Under all this pressure Harold and George buy a hipno-ring and hypnotize the principal to hand over the tape. During this commotion, they force him to become Captain Underpants. He fights one of the biggest and weirdest bad guy ever. I won't tell who or what happened but if you really want to know then you just have to read the book. 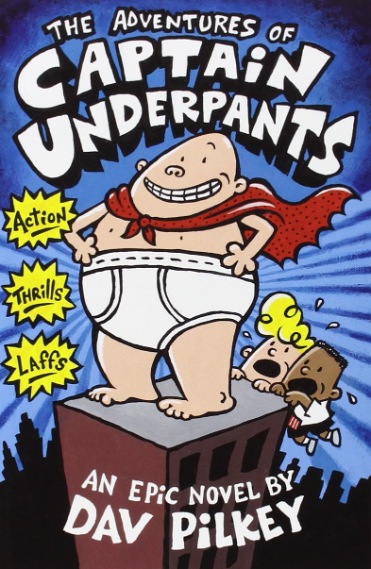