Review : What do you call a genius idea? Is it an amazing thought or is it an idea you thought was out of this world. I recently read a book called Tom Gates-Genius Ideas. The main characters are Tom, Derek,Joey and Delia. It is about a boy named Tom .His life is filled with excitement, shock and disaster . He has many friends including Derek , Norman and Amy and Solid. The only person in his school who doesn’t like him is Marcus Meldrew. I found it funny that during school hours Tom starts to doodle and Mr. Fullerman, his teacher is always keeping an eye on him even if he is innocent. The best part was that Tom’s dad had been practicing for his son’s sports day parents race and he was planning to beat Derek’s dad in the race. And the funniest part was when Delia ,Tom’s horrid older sister tried to colour her hair and accidently turned it green. If this family couldn’t get any better Tom’s grandmother is so crazy when it comes to food. Some of her recipes are sausage & jam rolls, peach & pea soup and raspberry & tomato pie . This is definitely the most hilarious book I have ever read. I would rate this book 9 out of 10. 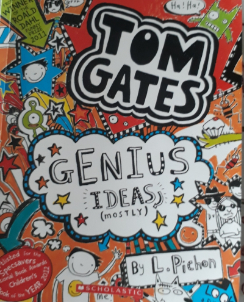